Secret ingredient banana pudding is such a great dish for a potluck or if you’re craving some classic southern food.

My mom always made banana pudding growing up when we had extra bananas. I was shocked when my husband told me he had only had banana pudding once in his life! I was on a mission to make my hubby a special treat and so I decided to make this special secret ingredient banana pudding.

Something I love about this banana pudding recipe is that it’s not only yummy but it is so easy. This is a no bake recipe and totally easy to make. It’s the perfect dessert for potlucks, holidays, or just because. I love that it’s not a really heavy dessert. It’s an especially nice and refreshing dessert after a heavy meal.

What type of dish do I need for this recipe?

For this banana pudding you’ll need either a trifle dish or a large casserole dish (about 4 quarts).

Can I make this banana pudding recipe ahead of time?

This recipe is great recipe to make ahead of time. Whether you want to make it the night before or a few hours before, you totally can. If you are worried about the bananas browning brush a tiny amount of lemon juice on them. Note that too much can change the taste so be careful.

So, what’s the secret ingredient in this banana pudding?

Well, it wouldn’t be a secret any more if I told you! Just kidding, the secret ingredient in this recipe isn’t shocking or anything crazy at all. The secret to this amazing banana pudding is a little nutmeg and cinnamon. It seems simple enough but they really do make a huge difference, trust me on this! You have to try it.

What ingredients do I need to make this recipe?

Start making your grocery list or checking your pantry because for this recipe, you will need:

How long is this banana pudding good for?

You can keep this banana pudding in your fridge for up to two days. After two days the bananas start to become too brown and mushy. 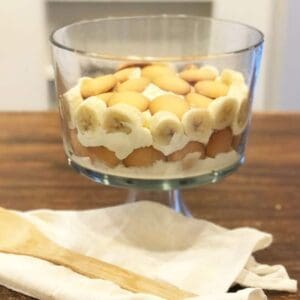 Nutritional information is an estimate only.

Busy mom here! I would love to make it easier to feed your family and entertain your kids. You will find tons of recipes like easy weeknight dinners, copycat recipes, unique desserts, as well as lots of fun activities for kids.

My website has been featured on MSN, Yahoo, Parade, Food Gawker, Love What Matters, Yummly, and more. Read more →

Amazon Affiliates Disclosure: I am a participant in the Amazon Services LLC Associates Program, an affiliate advertising program designed to provide a means for me to earn fees by linking to Amazon.com and affiliated sites.

We use cookies to ensure that we give you the best experience on our website. If you continue to use this site we will assume that you are happy with it.Ok